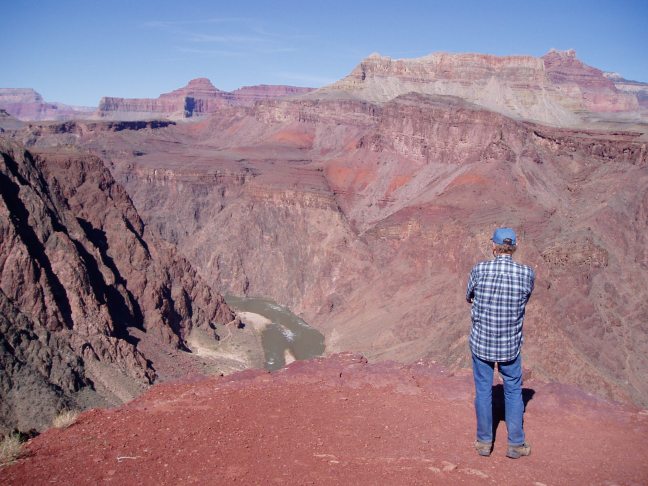 One last tug secures my instep crampons; winter’s ice makes them necessary. Our destination is almost one mile below us, just over seven miles by trail. I have been there before; they have not. My eyes move quickly, glancing at the trail, the ice, their equipment, their faces—they are ready. Pausing for a moment, I focus on him. I need no courage to face this challenge; I have done it many times. But I draw strength from his presence, strength from his past. He is stepping into another unknown, an unknown made possible by a given, a bond. An unknown made possible by friendship.

We share a common background, our lives intertwined by a love of aviation and a combined 70 years of flying aircraft. His career was curtailed in 1990 when doctors diagnosed a persistent deadly cancer.

Losing one love, he was sustained by another, a constant in his life. She was with him when he was too sick to talk, when morphine would not control his pain. She was there when he was in remission, and held him when his 6 foot 2 inch body withered to 128 pounds. Her love wrapped his inner strength, holding him close when doubt seeped through his resolve.

His life, now a series of unknowns as he moves through experimental treatments, is defined by the way he confronts adversity, by his ability to defy medical predictions. It is defined by his words, “probabilities are not the same as possibilities.”

Through him, through his battle, I have learned that I do not understand pain but I came to understand courage. I have broadened my understanding of strength, integrity, optimism and determination. “Hero” has moved beyond written definition.

My Canyon experiences fed his imagination; my hikes became part of our friendship. I never set foot on the trail without praying for success in his struggle for life. I never hiked without discussing the journey with him.

His optimism, his way of making the improbable happen, made this hike possible. While not cancer-free, he has gained enough strength to experience a small slice of this fissure. He is strong enough to walk in the Canyon.

Stepping from the rim to the ice of the South Kaibab Trail, Moose accepts a gift. For the next three days reality will reshape years of imagination, possibility will triumph over probability. He will live in the Canyon.

4 thoughts on “Moose in the Grand Canyon: Chapter One”

For a brief description of this site and short autobiography click 'MENU' (above and right) then 'ABOUT'.